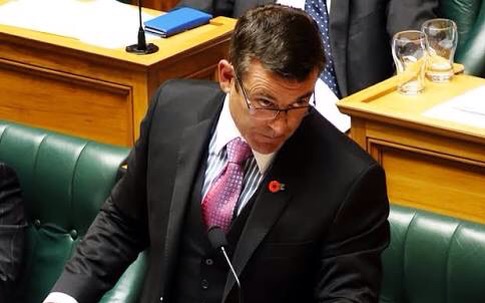 There were lots of cool things I got to do when I was at the Treasury. My particular fave though was getting to coordinate the legislation that went through on Budget Night under urgency. I probs didn’t have to be there the whole time but through a combination of excessive diligence and deep love of the atmosphere in the House I was.

Urgency can go to 10pm on a Thursday and midnight on a Friday. So you can imagine it can get pretty surreal at times. And pretty much the only people who are there the whole time are the respective chief whips – or is that chieves whip – and an overly conscientious Treasury legislation coordinator. Although the formers and the latter NEVER interact.

It was in my first year of doing this gig that I noticed the Government Chief Whip Michael Woodhouse. There was just something about him that I liked. Whether it was the way he said: New Zealand National Party – twelve thousand million, Maori Party three, Act 1, United Future 1; or the way he seemed to be part of the National Party team while also not being part of some of the rougher baracking; I couldn’t say. Regardless the man impressed me.

Fast forward to him joining the Cabinet and becoming Hon Mike. He was Minister in charge of the changes to workplace safety. Now your correspondent with her left leaning tendencies was not best pleased with the final outcome but in her view Hon Mike took one for the team. Let me explain.

The original Bill was one that was widely consulted on and had agreeement of Business and the CTU. That would not have happened without Hon Mike’s ministerial sanction and support. Cabinet as well but a Minister has to take a paper to Cabinet and that would have been MW or a predecessor.

As an aside this would have been a great piece of work to have been an official on – at the beginning anyway. A chance to make the world a better place and a form of redeemption after Pike River. Although I understand that the Forestry death toll was also uppermost in the heads of those involved in this work. Regardless at times like this there is nothing better than being a Public Servant.

As a further aside I really do hope there were some juniors on this work. As watching how this piece of work turned from a ‘hands across the water’ bipartisan love fest into a partisan bureaucrat’s nightmare would seriously season a junior official and be the stuff of a Treasury senior analyst interview. Either that or send them screaming into the waiting arms of the private sector. And as I tell my children, and anyone who will listen, good experiences are not always pleasant ones.

But back to the topic and enter backbench revolt stage left. Hon Mike and his officials were then scrambling to make the best of a bad job. And it wasn’t pretty – worm and lavender farmers but not dairy farmers – geez.  Big ups to Sue Moroney for spotting that – shows an attention to detail that politicans are often not big on. But here’s the thing  – in all the resulting fallout all of it landed on Mr Woodhouse. Not the PM, not the Cabinet, not the National Party – all on Hon Mike. I was so impressed.

For his sterling work on this he was then ‘rewarded’ with the Revenue portfolio. Since Michael Cullen handed it on, it has been a pretty junior Ministerial position – often outside Cabinet. This continues to surprise me as it can be one of the harder gigs. For everyone else, they have to make decisions on giving stuff to people or not giving stuff to people. The MoR has to make decisions on taking people’s stuff off them in the first place. And none of them go quietly.

So how is the boy going?

Now some could argue this stuff should have happened years ago. And maybe it could but Hon Mike wasn’t in charge then. So for an interim ranking I’ll give him the same ranking I always got at the Treasury as a Principal Advisor  -‘meets expectations’. Because like the Treasury my expectations are always very high.

For the final review and ranking we will have the benefit of the  2017 tax expenditure statement which will show just how good a gatekeeper he is. More that statement on Friday.